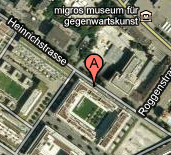 A simple and yet fascinating and useful example app by Keir Clarke (@keirclarke) for all those many people who don’t have a Google Nexus One mobile phone yet (or any other similarly powerful turn-by-turn navigation device):

E.g. for driving directions on how to get from Zurich Airport to Printscreen GmbH‘s homebase by car(*), enter

And hit the “Route” button to display a map and list with driving directions.

Then click on “Drive” to see an animated simulation of your drive on Google Maps Street View.

Great, isn’t it? Now imagine this would be a seamless video..

P.S. If you’re looking for ideas for a road trip, consider taking this Grand Tour in Italy (and Switzerland and France). (Even better: Go by train and other public transport and you won’t even need a car or driving directions ;)